Just a few days after we announce the presence of Jonathan Morris in FEST 2019, who is coming to our event to discuss his perspectives on editing social realism film, we provide you with a better understanding of what is, after all, “Social Realism”.

Although art has been timelessly recognized as a form of expression, in the 1920s particularly in paintings, art had its form in surrealism or expressionism. When applied to movies, the focus of the art form was the romanticizing of the plotline and the aesthetics of the shots.

Empowered by the deep challenges the world was facing, namely the Industrial Revolution and the Great Depression, artists started turning to realism. Realist art had the goal of being accessible and understandable to all, encompassing a larger audience at the same time it often attempted to portray them.

Here we witness the birth of “Social Realism”.

The “social realism” movement in painting appeared between 1920 and 1930. After overcoming a War, and never expecting a second one, almost every country in the world was recuperating from a monumental political, social and economic downfall.

However, the arrival of social realism to film was just in the 1950s. In the 60s, social realist films became a commercial success, as people hurried to the cinemas to see “Billy Liar” (1953) or “Cathy Come Home” (1966). Feeling the need to turn to real-life events, these movies often touched rather uncomfortable topics such as unemployment, in the case of “Billy Liar” and homelessness, in the case of “Cathy Come Home”.

This movement can almost be demystified by an etymological analysis of its name. The word “social”, leads us to think, inevitably, about our society and ourselves, as a part of it. The word “realism”, sends our minds thinking about non-fictionized things. By bringing both words together and forming a unified concept, we can conclude that “Social Realism” is a movement that focuses on exposing, the most faithful way possible, the human figure and the human condition.

Social Realists use their art as a weapon to call attention to society’s pivotal problems, whilst fighting the status quo and the upper-class society class systems, that they hold responsible. By representing real people in society and every day struggling lives, the artists tended to abandon romantic and impressionist traits that previously had characterized art. The eagerness to represent the world as it truly was, gave way to depicting the rudeness that was a daily reality and that distinguished life after the Industrial Revolution and the economic crises.

Leaning mainly over the exploration of the working class, generally portraying factory workers or hard work laborers of another sort, social realism found itself on a search for new lexis and came to fill a void in the art universe, shedding a light on a topic with massive social importance.

Although “Social Realism” can be easily related to paintings, it is important to keep in mind that this artistic movement affected deeply every form of art.

We can find notorious examples of social realism in paintings such as “Demonstration” (1934) from Antonio Berni. This painting shows a crowd of unemployed men and women, that march down a main street. One of the workers portrayed carries a sign asking for bread and work. 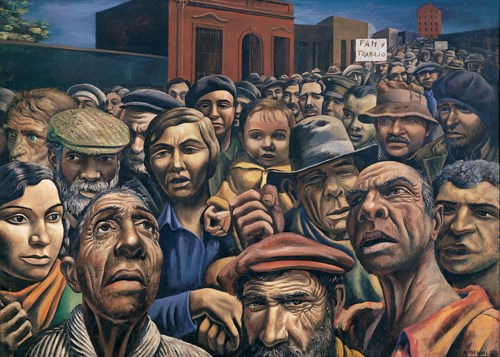 In photography, we can also find good examples of social realism. The renowned “Migrant Mother” (1936) is a photo that was taken by Dorothea Lange while she was under the employment of the U.S. government’s Farm Security Administration. Florence Owens Thompson was then found to be the “migrant mother” depicted in the photo.

Film was not an exception when it came to portraying real life.

It was in film that the “Social Realism” movement found an essential vehicle of its promotion. Some major works in the field come to us by the hand of director Ken Loach. “Riff-Raff” (1991), “Sweet Sixteen” (2002), “The Wind That Shakes the Barley” (2006) and most recently “I, Daniel Blake” (2016) are some examples of his work. The Britain based director insists on showing the world the problems that overwhelm his hometown. His film “The Wind That Shakes the Barley”, from 2006, won the Palme d’Or in Cannes Film Festival, by exploring the conflict in Ireland, the country’s hidden agendas and the motivation behind the creation of IRA. His second Palme d’Or win came recently with “I, Daniel Blake”.

Ken Loach works in close collaboration with Jonathan Morris, his trusting editor. Jonathan Morris will be attending FEST 2019’s Training Ground with a Masterclass on the topic of “Editing Social Realism”.

As an expert in the field with years of working with the genre, during his masterclass Morris will be carefully dissecting his editing process in Loach’s films, the need he has to accommodate when editing so to make it as faithful as possible and the challenges that social realism brings to editing. The shots taken and edited in social realism films, have to capture the audience and make them feel like the situation is happening, not merely serving the purpose of being aesthetically pleasing.

Make sure you catch him this year at FEST’s 15th edition. You can expect to end up with a better understanding of social realism and the activism inherent to it.