Tagline: The working-class residents of a scrappy seasonal trailer park reveal the secrets to a rich life as market forces threaten their shabby Shangri-La.

In a waterfront campground off the coast of Virginia, tenants live spitting distance apart in rows of ramshackle RVs. Inlet View has horrific roads, questionable septic and feral cats roaming everywhere, but beneath a few white trash stereotypes lies an improbable utopia where loneliness and isolation are inconceivable.

The location is spectacular. Dolphins swim just offshore, and pelicans glide past the prettiest sunsets anywhere. Its assets read like an overwritten real estate brochure. And yet, the real magic of Inlet View is the people – kindred spirits who look past the obvious flaws to be part of something bigger than themselves.

Over the years, the campers and their trailers have grown deep roots. As rumors circulate that the property is for sale, it’s only a matter of time before they lose their place in the sun. The affluent crowd that moves in will never be as wealthy. 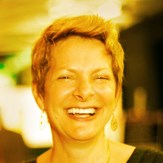 Amy Nicholson is a commercial director and documentary filmmaker based in New York City. In a previous life as an advertising executive, she created campaigns for clients like Snapple, Got Milk? and Nike. Nicholson’s most recent documentary is a short titled Pickle. Pickle garnered audience awards at multiple international festivals including Full Frame, Traverse City, and Aspen. Pickle was nominated for an IDA Award and Cinema Eye Honors, selected for New York Times’ Op Docs, and featured on the Criterion Channel with Errol Morris’ Gates of Heaven. Nicholson has produced and directed two feature projects. Zipper: Coney Island’s Last Wild Ride won a special jury prize at its sold out DOCNYC premiere, and was held over twice at the IFC Center, qualifying it for Oscar consideration. Muskrat Lovely premiered at The Hamptons International Film Festival and was broadcast nationally on the Emmy Award-winning Independent Lens. Nicholson recently wrote and directed Irony, a narrative short comedy that was chosen to be a Vimeo Staff Pick Premiere. Both of Nicholson’s features have aired on PBS. Her films have screened at Hot Docs, Sheffield, Full Frame, DOK Leipzig, BFI London, Florida, Hot Springs, Camden, Montclair, Traverse City, Rooftop Films, and the MOMA. They have been reviewed by Variety, Indiewire, The Hollywood Reporter, The Wall Street Journal, and The New York Times.