Tagline: Focused in the encouraging and contagious work done in the Jenin Refugee Camp, in Palestine, six different life stories reveal the strength to overcome their silenced voices for more than 70 years.

Known as the Capital of Martyrs, Jenin witnessed a massacre in 2002, during the Second Attack (Infitada). The highest impact was felt in the Jenin Refugee Camp, housing 17,000 people in just 1 square km. International media coverage left a mark in people’s perception of Palestine, as a place of uncountable incidents of armed violence, undermining the remaining sources of resistance.

The grief and permanent oppression caused by the massacre, gave birth to some inspiring projects, revealing different forms of resistance.

Six real life stories, reveal the daily lives of people who believe they can peacefully make a difference, whether through art, speech, or other actions to empower women. 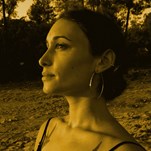 Diana Antunes graduated in Cinema, Video and Multimedia Communication from Lusófona University of Humanities and Technologies, in Lisbon.

In 2011 she directed her first short-film How late it is?. She moved to London in 2012, where she directed some projects which were later exhibited at the Somerset House and the V&A Museum.

In 2015, Antunes went to Los Angeles to take part in a film residency at the CalArts. She returned to Lisbon, and has been working as a director for commercials and music videos since then.

In 2020 she produced a short film, and is currently finishing her first documentary feature and her first TV fiction feature.