Tagline: An apotheotic aplause to an absent President doesn't seem to end, as anyone who stops seals his own fate.

A political party meeting ends with a message of praise to the President that sparks apotheotic applause. In the middle of the crowd there are also members of the State Police, and the applause does not cease. The minutes pass and the arms get tired, sweat runs down heaving cheeks. On the dais, a man becomes aware of the ridicule and concludes the ovation, and with him the dozens of people in the audience.

The man is imprisioned. 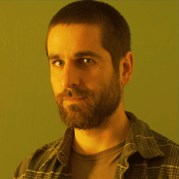 Guilherme Daniel graduates in Applied Mathematics before joining Film School in 2009. There he directs two short-films, Ponto de Fuga (2011) e O Silêncio das Sereias (2012), before graduating in Cinematography with a minor in Directing. Since 2012 he works in Film and Advertisement. As a DoP he shoots 16 short films, four documentaries and two feature films.

From 2013 on he writes and produces short-films, such as Maria (Joana Viegas, 2014) and Ermida (Vasco Esteves, 2015). In 2017 he directs Depois do Silêncio, work to be followed in 2018 with A Estranha Casa na Bruma and in 2019 with Erva Daninha. These short films won awards in national and international film festivals, having the last two won the National Competition at MOTELx - Lisbon International Horror Film Festival, and the later the National Grand Prix at FEST 2020. His new short-film Os Abismos da Alma is now in post-production.