Tagline: Íris is a bailiff and witness the social chaos. Sick by situations of the lack of justice, Iris will receive an ancestral call to investigate a major corruption scheme, that involves land grabbing.

Iris, the protagonist of The Messenger, is a 34 year-old black woman who works as a bailiff, a profession that bears witness to social injustice. After taking part in a series of land evictions, Iris suffers from problems with her sight, is plagued by strange nightmares, and has difficulty sleeping. She seeks medical advice from a doctor but is frustrated by the responses and begins to increase her medication. Iris is in charge to carry out Anderson’s arrest, an activist linked to the quilombola issue that has been denouncing the process of land grabbing. Psycologically shaken, Iris takes time off
work and leaves Salvador to visit her father in Cachoeira, one of the most important cradles of the Candomblé religion in Brazil. Visits to Iris' hometown represent moments of softness and affection in the film. In Cachoeira, Iris decides to go to the place of worship (terreiro) of the spiritual leader (mãe de santo), Mãe Luzia. She discovers that Xangô, the deity responsible for justice, demands a response from
Iris, who bears witness to so many problems in her daily work but fails to act. On his return to the capital, Iris hears of the news that Anderson disappeared after his arrest. Iris breaks free of the inertia that has been holding her back. She faces up to the reality of the scheme involving the judiciary and the land grabber. Iris’ friends, concerned for her safety, try to convince her not to pursue this cause. Some of the other bailiffs are already too deeply involved. 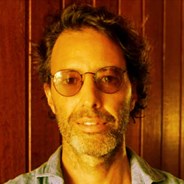 Cláudio Marques worked exclusively in cinema for 25 years. He founded the Coisa de Cinema production company, where, he realized five short films with Marília Hughes. They have received acclaim for their five short and four feature films. With their short films, they have participated in approximately 250 festivals and special screenings and won 68 awards. The couple’s first feature-length film, Depois da Chuva (2013), was the winner of the best script (Cláudio Marques) at the 46th Festival de Brasília do Cinema Brasileiro. Depois da Chuva received its international première at the 43rd Rotterdam International Film Festival in Holland. It was also selected for approximately 25 festivals in Brazil and abroad, like: BAFICI, Cinélatino and Chicago Film Festival. For the largest media outlet in Brazil, Depois da Chuva was the best Brazilian feature of the last ten years. A Cidade do Futuro (2016), also co-directed by the couple, was screened at 48 film festivals around the globe, for exemple, the Festival Cinematográfico Del Uruguay and Indielisboa, and won Best Feature at BAFICI (Argentina). The film’s international premiere took place at the legendary Festival de la Habana (Cuba). The festival career of Guerra de Algodão, included screenings at the 54th Montreal World Film Festival (Canada), the 42nd Montreal World Film Festival (Canada), the 42nd Atlanta Film Festival (USA) and 68th International Film Festival Mannheim Heidelberg.