Son of the Streets

Tagline: The Palestinian boy grows up without ID in Shatila refugee camp in Beirut. In the struggle for citizenship, his right to education and health care, harrowing family secrets come to light.

Khodor's parents have both died, so he grows up with his stepmother. The 13-year-old is cool and relaxed in front of his friends of the same age, but his new family often enough feels the pent-up aggression of the pubescent. His stepmother and half-sisters are desperately trying to get him a document that proves his existence and gives him the right to education, health care and freedom of movement outside the Palestinian refugee camp Shatila in Beirut.

Despite the fact that Khodor is a naughty and impolite child, especially to his stepmother, the one who tries to help him the most, the documentary film is narrated in an intimate way, trying to explain what Khodor wants. He wants to live a decent and uncomplicated life in a better-off home than the small apartment in the refugee camp, which has water and electricity cut-off several times on daily basis.

The difficult circumstances he is going through and the frustration that befalls him whenever he builds hopes for obtaining the identification papers makes him angry with everyone around him, because he feels that they are all responsible for his present life and his future. He escapes from this reality to meet his beloved DOMO' (14), who is at the same age as him, they play billiards together sometimes and when Domo is at work — she sells roses at crossroads — Khodor goes to practice one of his favourite hobbies which is collecting and taming the pigeons. 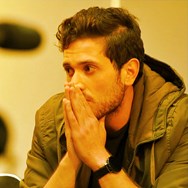 Director, screenwriter and cinematographer. He was born in 1994 in Gaza, Palestine. He pursued his Bachelor and Masters degree in Film Directing at Łódź Film School in Poland. In the past few years he did film in different areas in the world such as Cuba, Palestine, Denmark, China, Jordan, Lebanon, Poland and Germany. He is an author of documentary and narrative films, including Blacklisted (2021), Son Of The Streets (2020) Falafala (2019), Operation (2018), Where’s the Donkey (2018), Shujayya (2015) and Halawan (2012). His films were selected and awarded at numerous film festivals around the world.

"Being a Palestinian director, I've been always interested in telling the stories of the Palestinian people who are deprived from their basic rights, either they’re living in Palestine or outside of Palestine. Life in Gaza has had a great impact on my life and on the stories that I want to tell, especially the stories of children who are born in areas of armed conflict and are trying to get what is happening around" - Mohammed Almughanni.