Sergius is 16 years old and is a looser at least his father and old brother, treats him like one. The thing he's good at is LARP (live action role-playing), which is an alternative to computer games and became popular among young people. Sergius and a group of alike "lossers" are often diving in the fantastic world of the princes, princesses, elves and imaginary battles to be a hero, a brave and awesome. But at school there are hiding their hobby. One day a new girl appears at his school Helena. Sergiusz falls in love with her immediately this happens quite often to teenagers, usually it is love from first sight. He is totally enchanted by her, but she joins the group the so-called popular who don't talk with such lames like him. Sergiusz decides to follow his heart and reach the queen of his dreams fighting for love in a real and fantastic world as well as recognition in the eyes of the father.

He becomes brave, confident, and finally able to confront the strict father (a local policeman), a brother standing up to fathers standards and competitor from rich family with his supporters who constantly bullies him. In the final of the movie the spectacular fantasy battle going on, paralel in a fairy tale (LARP) and in real world of the village, real clash heppens with the participation of the local police, he saves beloved one and conquers her heart. 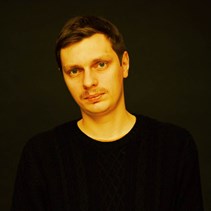 A graduate of the production and direction organization of WSRiTV in Katowice. Member of the Polish Filmmakers Association.

Creator of short films: Fusy (including the Grand Prix Etiuda & Anima 2017) Szczękościsk (Main Award in the Competition Young Cinema at the Feature Film Festival in Gdynia 2016) Larp (awarded at festivals in Barcelona, St. Petersburg, among others Brno, Brest), Muka! (Including the Debut Award at the festival in Ann Arbor and Audience Award "Etiuda & Anima"). Director of advertising promos and music videos.