Tagline: A successful Bosnian-American banker is forced into the dark underbelly of Florida's Bosnian Muslim immigrant community in order to solve his brother's untimely death.

Living in a Tribeca loft, with a high-paid job on Wall Street, and a perfect American girlfriend by his side, Kenan’s life couldn’t be further from where he started – a bad part of a shitty town in Florida, where he and his family landed 22 years before, as Bosnian War refugees.

So, when he gets a call that his younger brother Armin died of an accidental drug overdose while visiting their mother in that same neighborhood, Kenan’s plan is to go there, bury his brother, take care of his mother, and get back to NYC as quickly as possible.

That all changes at the funeral, when Mirso, Armin’s childhood friend-turned drug dealer-turned reformed criminal tells Kenan it was no accident - Armin was killed, and he has witnesses to prove it. The police refuse to investigate, so Kenan is left with no other option but to integrate himself into the dark underbelly of the Bosnian immigrant community in order to find out the truth, confronting many of its nefarious characters, including Bojan, a way too trigger-happy gang leader, and Lea, the girl Armin was seeing at the time of his death, who may or may not have been responsible for what happened.

A truth that proves to be very hard to accept when Kenan starts sleeping with her too. 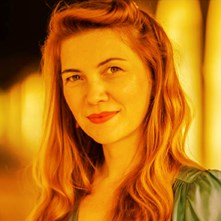 Born in Bosnia and Herzegovina, Sabina Vajrača immigrated to the U.S. as a war refugee, and started her directing career in NYC theatre.

Her critically-acclaimed feature documentary Back to Bosnia (2005 AFI Fest / Director’s Choice, 2006 Crossroads) is featured in the top 100 of the greatest films directed by women by BBC and available on Amazon.

Most recently she co-directed a USC/Warner Bros. feature drama Voodoo Macbeth (Best of Fest, 2021 Sedona / Best Director Award, 2021 Charlotte FF), and wrote/directed a short drama Variables, which won numerous awards, including the DGA SFA Grand Prize, Alfred P. Sloan grant, and the Student Oscars, Student BAFTA and the Humanitas Prize nominations, and is currently streaming on IndieFlix and Film Shortage, where it was named Daily Pick.

Sabina is a member of Film Fatales and the Alliance of Women Directors, an alumna of Ryan Murphy Half Directing Mentorship, the Nantucket Screenwriters Colony, and the Stowe Story Labs, and was in the top 25 selects for the 2020 HBO Directing Fellowship. She holds an M.F.A. from USC School of Cinematic Arts and is represented by Paradigm.