Tagline: On a beautiful sunny morning Augusta and Kátia wake up and try to pay their rent, but instead end up accidentally murdering the landlord.

On a beautiful sunny morning, Augusta & Kátia get ready to see Mr. Jair, their landlord. Kátia opens a box but finds only half of the money rent and a gun. Augusta confesses that she bought the object on a promotion to study it for 'The Peace Mandalas' her new painting series. Augusta regrets that she couldn't afford any bullets.

Mr. Jair arrives, but gets enraged at his recurrent debtor tenants and yells at them to leave. Kátia tries to ease the situation with a €1 coin she finds on the floor. But neither that, nor the broken glass in the lobby, nor the weeks of cold water, make him overlook the delay. Kátia bets for the truth and shows the gun to the landlord explaining why Augusta bought it. It's the last straw!

Mr. Jair goes in search of the police. Augusta kidnaps the weapon from Kátia’s hand, but Mr. Jair doesn’t get intimidated. Augusta cocks the gun and doesn't really know what else to do, so quickly hands it to Kátia who ends up firing unintentionally. Tenants then discover the complimentary bullet that came with the promotion. Mr. Jair's body falls like a coconut falls from a tree. 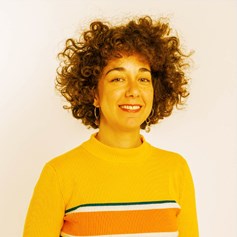 Born in São Paulo in 1987, Lud Mônaco is a Brazilian screenwriter & director, whose work explores the female universe. She studied film at the Barcelona Film School (ECIB) and her graduation project Para, pero sigue was awarded best short film at the Lisbon & Estoril Film Festival. Names such as Peter Handke were amongst the awarding panel.

Many of her short films have been featured in major festivals, such as the International Short Film Festival Oberhausen, Mix Brasil and Sitges Film Festival. Her work has also been showcased at the prestigious Museum of Image and Sound of São Paulo. Enjoy the Drama, one of her short films, has been released in a collection by the Peccadillo Pictures. Lud Mônaco has been selected for the Berlinale Talents 2017. She is currently developing her debut feature film, a tragicomic road-movie set in Portugal.

Based in both Barcelona and London, Lud has recently moved in to commercials, with her first project shooting for Uber. She is represented by Albiñana Films in Spain and Stable TV in the UK.