Since we're packing up our things to go to Berlin we found it appropriate to have a throwback on a Monday. We don't mean to offend those who expect throwbacks only on thursdays, but we do have a very good reason for it:

Exactly one year after the world premiere at Berlinale, "Inflame" director Ceylan Özgün Özçelik was kind enough to answer a few questions for us.

It's all part of the nurturing nature of FEST - Pitching Forum, where "Inflame" went through back in the year 2015. Now two and half years later, Ceylan tells us a little bit of what was it like premiering at Berlinale whilst being the only Turkish representative there, what happened next and how the past and the future line up. 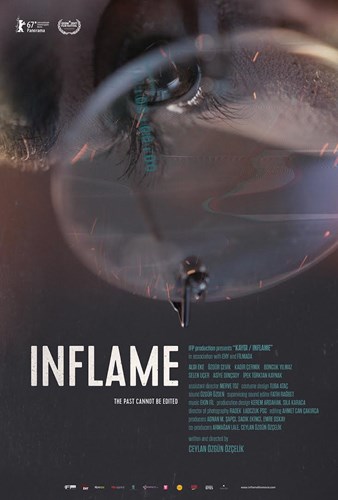 A year after the grand première of “Inflame” at the Berlinale 2017, what were the greatest accomplishments of your film?
"Since the Berlinale, the international press has been really interested in Inflame which was amazing! The film has been travelled more than thirty international film festivals from Sitges to Montreal FNC. I tried to be at the screenings for Q&A’s as much as I could. It was really beautiful, connecting with the international audience from very different cultures and to see how they receive the film."

What was it like to have the only Turkish film at the Berlinale?
"Besides the political currency of Inflame, having the only Turkish film at the Berlinale was the main reason of press attention, I guess. The most special thing for me was to be able to see my film playing as a part of Panorama Special, as a first time director. It was highly prestigious and a big honor."

You won the LUNA® Gamechanger Award at SXSW. What did this mean for you personally and for the film?
"A dream came true! Not just the award but the whole festival was an unique experience for me as a newcomer in every way. U.S. company FilmRise has bought North American rights to Inflame which allowed the film to be streamed on Amazon for American audiences. The BluRay and the DVD released in U.S. even before Turkey. Also we got quite attention from North American film industry for my upcoming project."

You were a participant of FEST – Pitching Forum in 2015. How do you think this participation influenced your project? How was it helpful?
"This participation changed my whole perspective about pitching thanks to the training experts. I realized that I wasn’t choosing the right words to express my story and visual approach. They tought me how to pitch Inflame in the best way to the producers, financers and all. I also did learn too much about the body language and how to use my voice most effectively. All these are extremely important. Because the first thing we - as the new directors - need to do is to make people listen to us, understand what we are trying to do. All starts with make people pay attention to our project and us. Pitching Forum definitely helps to reflect our personalities in the right way. Besides, the communication between the directors was strong which also gives each other confidence."

What are you working on right now? Would you apply with your new project to the FEST – Pitching Forum?
"I’ve been working on my new script quite some time, titled 18+ , a dark comedy about women and violence. All happens in one specific night, in one family house in the woods.
Wonderfully, all-female cast! And we are willing to work with both national and international names (just women) as the head of departments. Process of funding is getting harder each year in Turkey. Sadly, it’s exhausting to trying to find financial support. That’s the main reason why I cannot apply FEST. Even though my new project would be selected, I won’t be able to cover expenses. I know that it seems very dramatic and so! But that’s just the ironic truth."