As it has been mentioned before, this year’s film program is perhaps the most provocative in 13 editions.

All those looking for a political edge will be delighted to find out that our Be Kind Rewind this year is dedicated exclusively to Off the Wall Expanded, an hand pick program of films that challenge different visions of contemporary Europe, all made by new European filmmakers. Many of these films have been travelling within a network of partner festivals, and the project reaches its end at FEST. As such it became imperative to have several Off the Wall films, spread across the program, which include the very provocative “Caina” by Italian filmmaker Stefano Amatucci, a film that will leave no one indifferent with its portray of a less then scrupulous life in an Italian beach where the corpses of many illegal immigrants and refugees end their journey.

Equally exciting is our Flavours of the World section, where we once again picked a series of regions that are giving us great signs of the emergence of a particular talented new generation of filmmakers. For this year’s edition we picked Greece and Iran, two countries that are surely no strangers to this sort of spotlight, yet somehow keep on surprising us. Two screenings of short films make up this section, which will present some impressive productions such as Konstantina Kotzamani’s “Limbo” or Behzad Azadi’s “Slaughter House”.

Flavours of the World listing 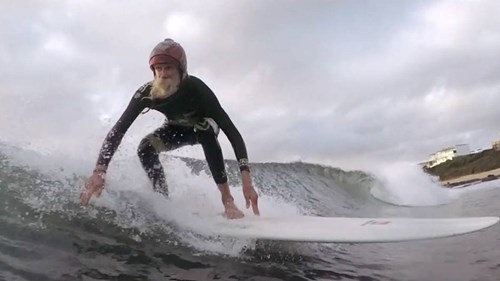 And to finish off today’s announcement with a bang, it is with great pleasure we announce the return of our FEST Surf section, which includes a series of open-air beach screenings of films related to the sport. This side section will take place simultaneously to Espinho Surf Destination, a major junior world tour qualifying surf competition, which once again will make Espinho surf world’s capital for several weeks. Within this program of films it is difficult not to point out Joel Sharpe’s “Las Olas” and RC Cone’s “The Accord”, two films that will force many in the audience to reconsider many of their pre-conceptions about surfing.