As an all-encompassing film celebration, FEST does not look away from the beautiful town it is lucky enough to be hosted in and, therefore, aims to be present in as much of the city as possible.

Our festival is spread across town, but all of the festival venues are maximum a 7-minute walk from all the others.

The Multimeios Centre’s name roughly translates to multi-media centre, as it functions as a cinema, a planetarium, an exhibition hub and a general event venue. It is a space designed to welcome all platforms of cultural interest, while also serving as a research and study centre in astronomy. Exhibitions, concerts, conferences, festivals and lectures compose an attractive program.

This special venue, situated in the heart of Espinho, is the main site where FEST takes place. Masterclasses, Workshops, Industry Meetings and Filmmakers Corner all take place in this creative open space, that every year in June if filled with the most creative minds in film, and always receives them accordingly.

Located in Espinho’s public park, immediately beside City Hall, the library presents a privileged position, with an almost direct access to Espinho’s main pedestrian street (that leads to the sea), Rua 19.

With two quiet rooms equipped with computers, outlets, sofas and many, many books, the Municipal Library is the place to be if we wish to find some peace and work on any projects.
That is why, during FEST, the library holds the 2-day Pitch Training event that precedes Pitching Forum’s final presentations. 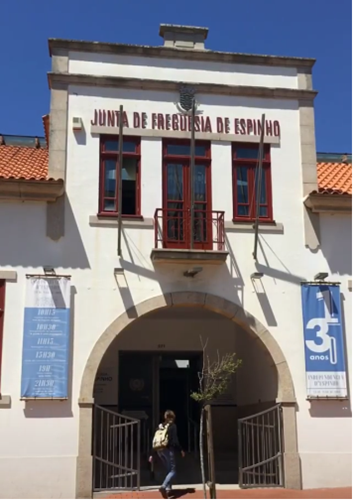 Heading north from the library and walking about 5 minutes towards the beach, you may soon find yourself on 23rd Street where you can find Espinho’s Parish Council.

The Parish is open to public attendance, providing and info point regarding the city. It is also where town meetings are held and, due to its auditorium on the lower level, it is where theatre and dance companies often put on their shows for the community.

Espinho’s Parish Council is a pivotal point during FEST week since it is where FEST - Director’s Hub sessions are held and where the Pitching Forum finalists present their work in the 5-minute pitch they train to do.

Perpendicular to the 23rd Street, only 3 minutes away, you will find yourself on a pedestrian street, filled with stores on both sides. That will be 19th Street, that you can follow all the way through and get to yet another Festival venue: the Casino of Espinho.

Open all year, the Casino is the meeting point for people from various places, who feel attracted by the vast programs that the Casino offers. From their dinner and shows packages, to their restaurants, conference rooms, art gallery and game rooms, Casino de Espinho keeps everybody entertained.

All year round, it also hosts FEST – Cineclube, a cycle of Films curated by our team that are presented to Espinho’s community free of charge, and debated after each session.

During FEST week, the Casino de Espinho encompasses FESTinha, the festival’s section for the younger audience and other film screenings that compose our Film Program.

Literally 1 minute away from the Casino, is FEST’s very own FESTival Village.

Standing shore side and with a view on the beach, this festival venue is open to everyone that might want to get to know FEST. Formed by a tent structure that harbours activities for all ages, a big screen and chairs that form an open-air cinema, a food court, a merchandise store and a Film Book Fair, Village is centre stage for the interaction between the city and the festival.

It holds Espinho’s warm-up, prior to FEST, and during the festival week it presents special screenings and other activities, ranging from workshops to our FESTinha audience to book presentations from industry professionals.

Inserted inside FESTival Village but almost as a venue in itself is FEST’s Festival Lounge. A space only available for FEST PRO badge holders, that offers participants an opportunity to relax, work or meet up with potential collaborators, topped off with a beautiful view.

Our Festival Lounge is a dynamic space, presenting during the week of the Festival happy hours with cheese and wine and many fun activities that we have in store.